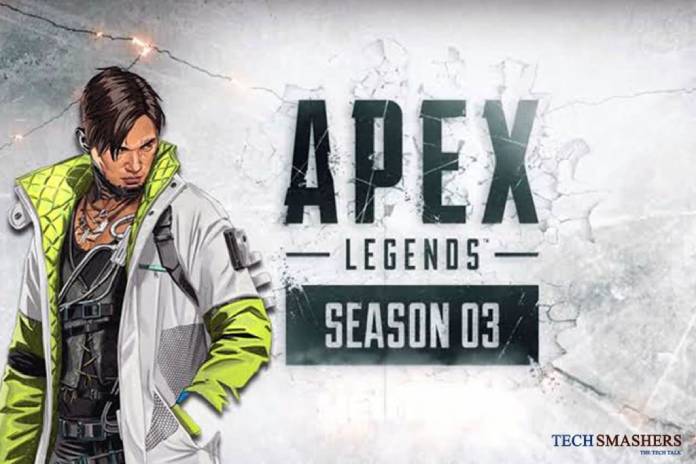 With the sudden announcement of Apex Legends Season 3, EA surprised many of its gamers. Apex Legends was developed by Respawn Entertainment a free-to-play battle royale shooter that sees the publisher going toe-to-toe with PUBG & Fortnite Battle Royale.

Apex Legends is a team-based battle royale shooter, where teams of 3 go up against 57 other players to try to grab the loot and be the last person or squad standing. However, unlike PUBG & Fortnite, Apex Legends sees players take on one of 8 classes, each represented by a unique character.

On October 1, Apex Legends has entered its season – 03 which is called Meltdown, this season is introducing plenty of changes. From new weapons to a new character to a brand new map there’s a lot to enjoy in Season 03 of Apex Legends for old and new players. Respawn Entertainment is seriously building on some of the much-needed and successful improvements that give us great hope for the future of this game that’s now very close to being 1 year old.

The latest patch has a lot of changes, but the major one is the level cap increase. Now, it takes 5% less XP to hit level 100, and if you manage to hit level 500 and you’ll hit a total of 199 Apex Packs all the way. You will get one pack per level from level 2- level 20, one every 2 levels from 22-300, then one pack every 5 levels from 305-500. You’ll still get 600 Legend Tokens for every time you level up, and Apex Pack rewards will be handed out retroactively. You’ll also unlock Level Gun Charms every 100 levels.

Into Apex Packs, 36 new Gun Charms are being added and will also now appear in the Rotating Shop so that you can directly buy them. A fun addition is that it will also add friendly fire to the new firing range. PC players will be able to experience this right now, but console Apex Legends fans will need to wait just a bit longer.

Also Read: WoW Classic Armory: Where Is It?

Is Snapchat not working? It is a typical inquiry from the clients of this application, who can't help thinking about why such issues exist....
Read more
APPS

It is the first time in quite a while that Facebook has lost clients: the information on the presentation of Meta in the last...
Read more
APPS

TikTok Is The Most Innovative And Effective Means For Marketers

TikTok is a crucial social network for those who work in marketing. Companies are starting to use it structurally with enormous advantages: here is...
Read more