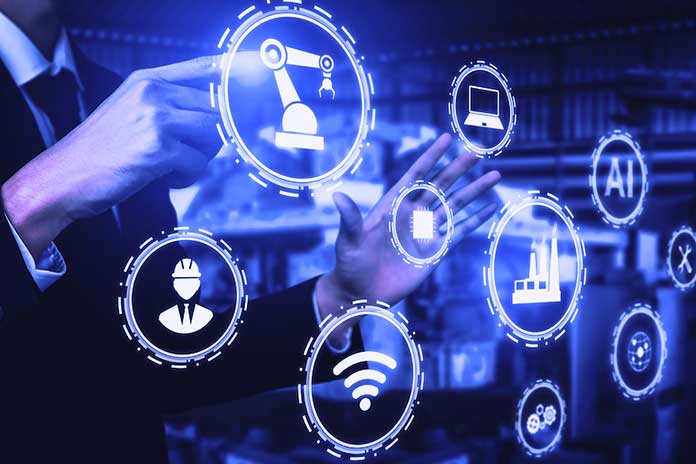 With the increasing degree of automation in machine tools, the machine peripherals are now the focus of process optimizers. At the EMO trade fair, solutions for various applications will be shown in Hanover.

Robots are increasingly being used as a flexible solution for different handling functions on the machine. This became clear on a tour of the EMO trade fair. Fanuc underscored this by the fact that robots take up ample space on the booth in addition to the CNC controls. “While it used to be about integrating robots into the machines, we are getting more and more inquiries about automating loading and unloading. Processes on the machines.” explained that robots on the control side are straightforward within the Fanuc family because there are no interface problems.

Kramm sees another trend in that image processing is increasingly integrated into robot systems. “Image processing systems have been integrated into all Fanuc robots for a long time”. This sensible combination has been used in our products for more than ten years. In addition, all of the company’s new robots would now be equipped with two Ethernet interfaces.

For example, a representative of integrated robot solutions was presented at Chiron from Tuttlingen. The company uses automation solutions to increase productivity for users: According to the manufacturer, the integrated FlexcellUno robot unit on the TZ15 W four-spindle machining centre can change workpieces in 2 seconds. In its flexible FZ12 FA manufacturing cell, on the other hand, Chiron has a multi-plate changer and – Integrated storage. This enables an unmanned device change, especially for small and medium-sized series. The pallet change takes place in 8 seconds.

According to the manufacturer, one of the latest solutions from Gildemeister subsidiary DMG Automation at EMO is the dynamic restacking system WH 3 U. This was designed for high storage capacity and fast loading and unloading processes. The robot moves the parts weighing up to 3 kg through the work area. According to the manufacturer, it takes 20 s to change the basket.

Reis Robotics presented its further developed six-axis robot series RV at the EMO for the area outside the machine, which also includes the vertical articulated arm robot RV30-16 with the RobotstarV control. According to the company, the spoken arm robot series for payloads from 6 kg to 500 kg has been further developed in addition to increased speeds and accelerations so that the interlinking of work processes between cutting machine tools and different processing systems, such as B. automatic loading and unloading, turning and transferring can be realized. The system is supplemented by pneumatic or hydraulic grippers, rotating units, integrated image processing systems, and material transport devices via belts, indexing chain conveyors, and roller conveyors. As a result, the system can also cope with workpieces fed in a disorderly manner, they say.

On the other hand, the main topic at the trade fair for the manufacturer Kuka Roboter from Augsburg was to have further simplified user automation. With a new software module Kuka.CNC, the direct processing of CNC commands according to DIN 66025 on the robot controls, was demonstrated at two partner booths. It is also possible to program the robots directly using a CAD / CAM process chain.

There are also innovations in the accessories for machine tool peripherals: Weiss spindle technology introduces an electromechanical release unit for changing tools on the spindle. The new system is shown on an HSK A100 milling spindle and can change the device without hydraulics or pneumatics. According to the provider, these spindles can be easily connected to the Siemens Sinamics drive family and the Sinumerik CNC. This is implemented with the “Weiss Spindle Drive-Cliq” – a new sensor module that significantly reduces the amount of cabling and accelerates the commissioning of the machine. In addition, the machine user can use it to quickly and easily call up information on the spindle status on his CNC user interface.